Ok. Get a cuppa. And maybe a snack. Time for my longest post race ramble! I’m on some form of post Ragnar high and with a total run hangover. And in my completely broken state, here are my Ragnar thoughts. I must do this now before I forget! Sleep deprivation.. let’s go!

Now it is safe to say that I basically had no idea what I was letting myself in for. I love a challenge and if it seems slightly crazy I will throw myself headfirst in to it. So this seemed like it had me written all over it! Plus Ruth asked. So YES!

Race prep included not giving it much thought. Worrying about my lack of trail friendly trainers 48 hours before the race. Packing an hour before the train. And looking back I literally smile at how blissfully unaware of the magnitude of the what I was about to do with my team (which from this point forward will be referred to as the van fam!)

Van fam. Ruth and Celeste are my Backpackers girls. Ruth being the team captain and organisational hero! And we had Ruth’s friends Beth and Helen. Never met these two lovelies – but funnily enough now I feel like I have known them a lifetime!

The journey started on Saturday morning at 6am from Maidstone. Still blissfully unaware of what was ahead! But we were off. We were actually going to run a 170 ish mile relay. I’m so chill… and Ruth is full on into the grime! Ha.

Ok. So here it gets a little more real. I am runner one and so I go first! So it’s all very much the Ragnar start line. Other vans. And I am so excited. I am due to run at 7:30am.

7:28am. We are watching a safety video. Hmm. And then it happened. We had two mins to run from the video to the van. Get my run stuff and to the line. Why do things in a relaxed manner?!

So leg one for me. I had not even had a glass of water LOL. I didn’t have my running vest of supplies. In the total rush… I had a my Garmin (phew. Obv take that in a mad rush over the water! Give me stats!) and my phone.

This 10km leg was rated as ‘hard’ but in my pre race prep I had checked the route and looked flat to me so all good! WRONG. This was a straight road up and down hills. Not all that scenic in Sittingbourne. But safe to say I realised this was going to be a little tougher than I first imagined!

One by one my van fam and I make our way round the coast line. The girls face fields of cows, jumping over fences, wrong turns and the start of the great rain. Celeste reveals her hiking knowledge!

And each and every one of them, every time I see them set off and come back. These ladies are badass.

Van life was in full swing!

After we complete the final leg it was time to meet van two for the first time. They had travelled over from Utah, joined by uncle Martin from Bristol. Are what a bunch of lovelies! We were so lucky to be paired with them.

Van two takes control and we head for a pit stop. Milkshake. Vants. And all the laughs!

I am not actually going to be any good as putting this into words but here goes.

There’s a theme for me being runner one. Notice period for “you’re turn” is very much non existent! And at 6pm ish I set off on leg two. This leg was Ragnar rated as ‘very hard’ and was 14km through a lil town, a golf course and a country park. Headlamp. And my run vest on so I was prepared! What could possibly go wrong. LOL. I’ll tell you! Feeling wise. I was really quite nervous about this leg. I was about to run in the dark on my own with little signs to direct me (genuinely.. the signage is good (mostly!) but it’s dark!).

As soon as I set off I did relax a little. And about 20 mins I was in by the coast running along small lanes, drenched, running through lake sized puddles. Other runners passed and Ragnar folk are the best! You are encouraging, supportive and kind like no other. I can’t pretend I wasn’t scared and to the runner that held my hand for a tiny bit.. you switched me from “I’m a little worried about the next hour of running” to “I can actually do this”. Safe to say I spent the next hour and a bit loving life!

Let’s chat country park. This section was running on a trail. It was total darkness. Total downpour. Uneven and muddy. And my headlamp was broken from the rain. That was a little concern – but with a phone and a charger in the running vest I was good enough! It’s funny how once you face your fears you suddenly feel like you can do anything in the world. I would do that run in those conditions a thousand times over. I did it!

In the night run stages we ran between 6am ish to 1am ish. And the weather was not in our favour. Conditions were rough. Nothing stopped us! The girls one by one headed out. They are strong AF and a total inspiration. Total fan girl! And the team support and celebration at the second stage was just incredible. You become so dependent on each other.

Night runs are tough. They will change things!

So this is where our van two head out from 1am to around 5am for their legs and we get a little ‘rest’. Reality is that you have an hour drive to our next switch point. Leaving us three hours to change, eat, prep and sleep.

This will be a short topic. Sleep in a van in a car park on the coast and get some quality sleep? No. Sleep at all? No. Topic complete LOL.

My lack of sleep. Reason being as runner one, I had to set off between 5:30am and 6am. And what happens is the second van show up and you have a short window to move to the exchange. So you are just on alert. Of course I was nervous too, no sleep and a 10k to run. Ruth and her Mumma vibes came into play here. This girly made sure I had the right clothes (my cold gear was drenched), headlamp, vest and the confidence. And the penguin cuddles that were needed as I stood frozen on the beach side waiting for Brenda from van two.

Final run for me. The sunrise run. This was so so hard. Ragnar rated hard. Mentally and physically this was the toughest. It was raining obv. And the body was shattered. I would say the signage was not as good… but the reality was I had no sleep for over 24 hours and I had already run 25km. 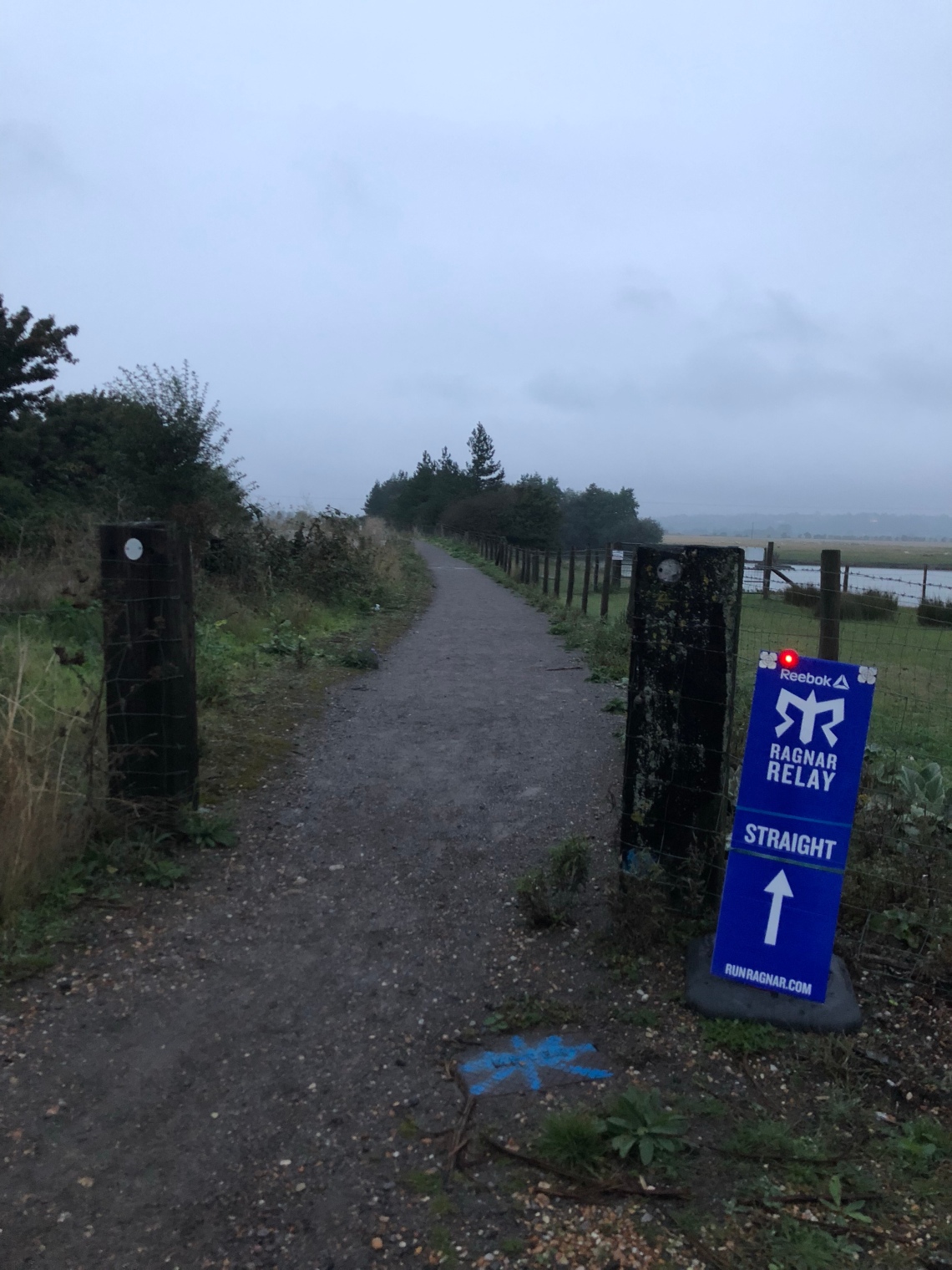 With two km to go I just cried. I hated that I couldn’t run as fast and I was exhausted. That last bit was such a battle. But my girls at the end and the tunnel. I just completed my stages of the Ragnar!

The weather continued to be total madness. Helen and Beth faced rain like like no other. In total awe! Ruth was a machine running in downpour and along pebble beaches. This lady was not so well last week and her strength! Yes girl! And then we had Celeste off on her final leg.

And something strange happened. The rain stopped!

Celeste said she was really worried (tbh rightly so..! It’s tough!) and when we drove past… she was practically flying! Incredible lady. And shortly after van one was complete. Now van two was to do their thing! So happy the weather cleared for their cliff runs!

We danced a little more. The girls had a massage. 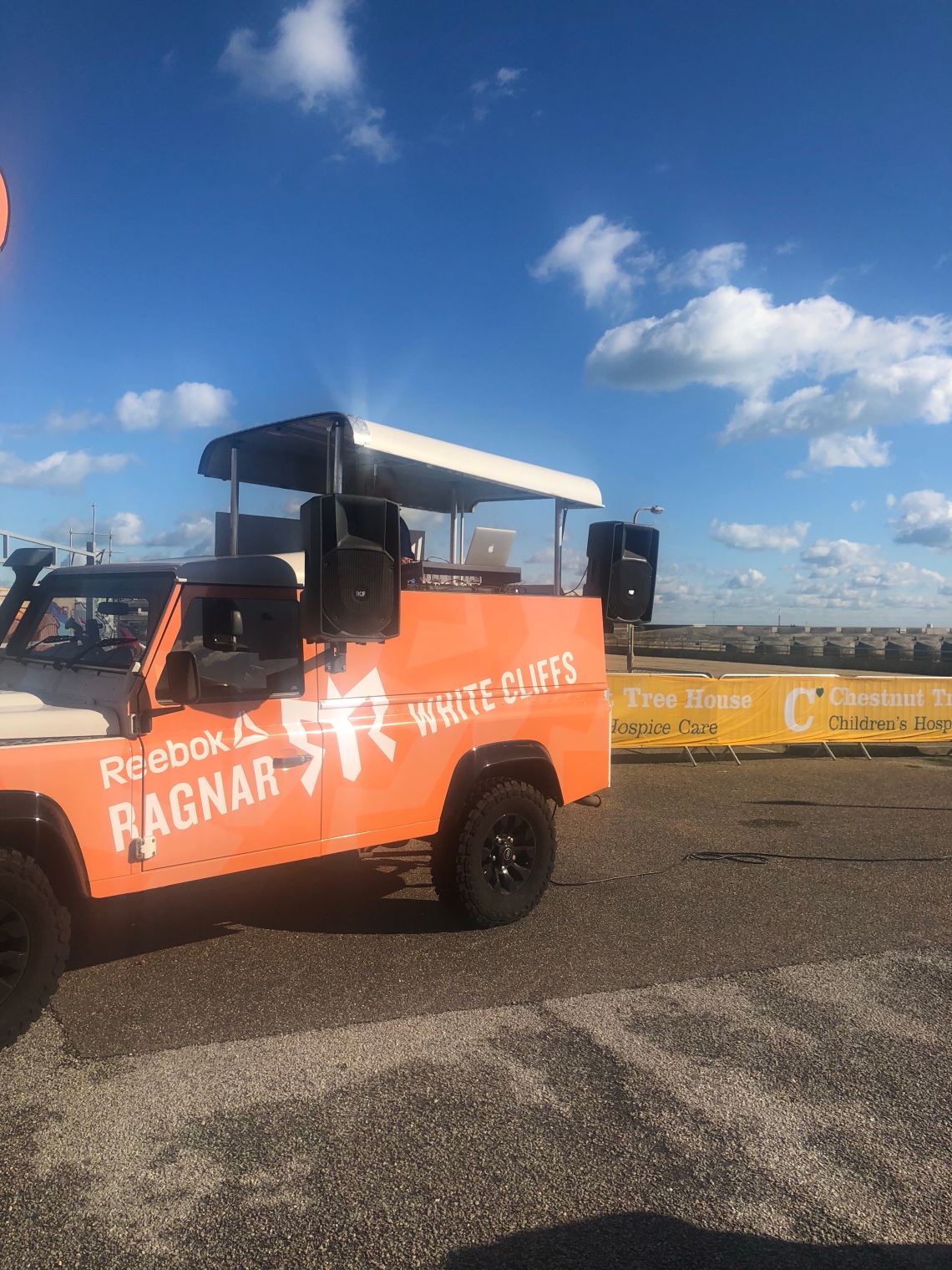 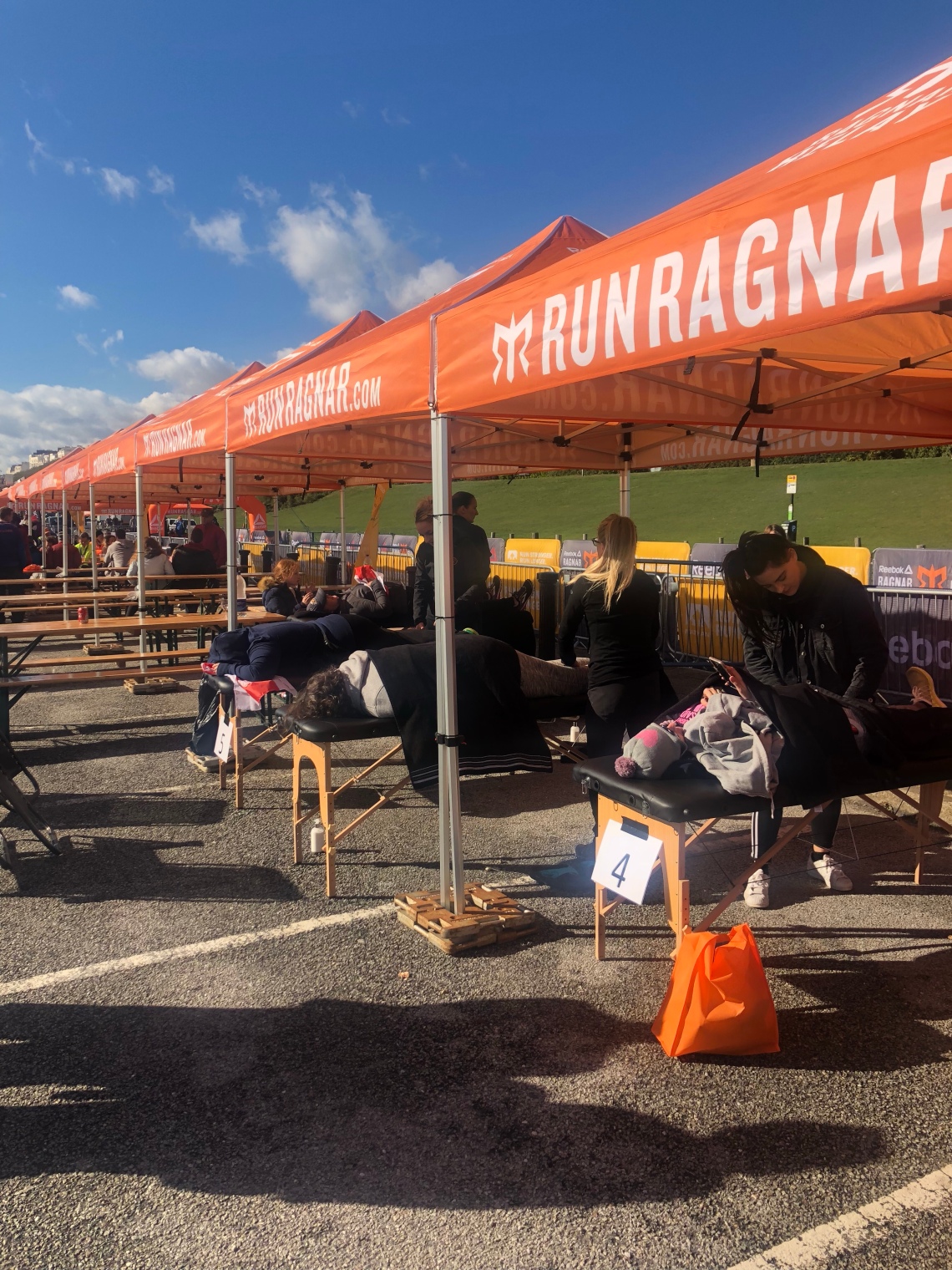 Van two. We couldn’t have been paired with a more perfect team. And running over the finish line together! WE DID IT! 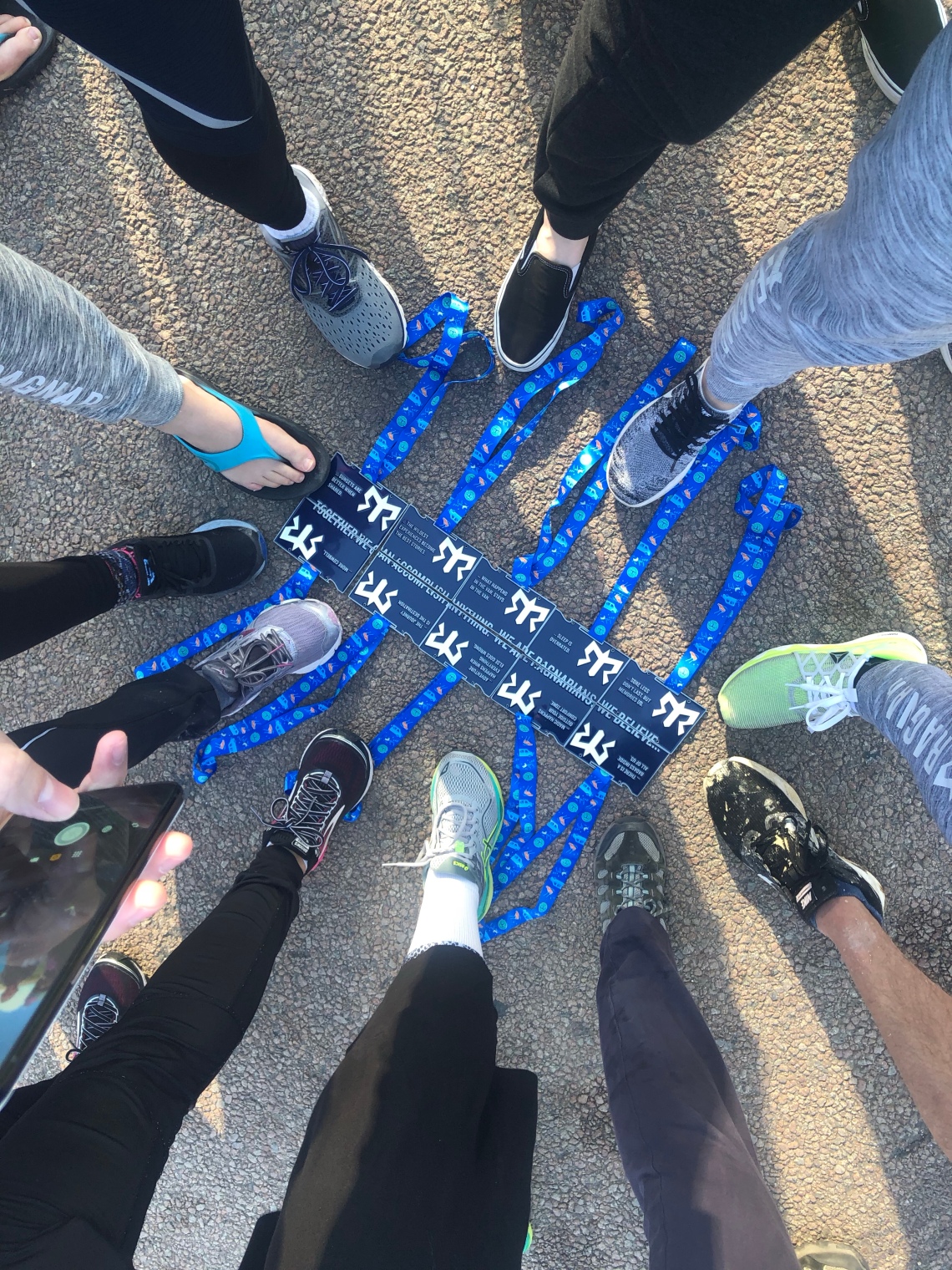 Team Backpackers was out in force. It was lovely to see Natalie and Jarnail out there! What a team!You were amazing! And of course, as always, the BP were on full support mode all weekend. You lot are wonderful!

Packing van. Getting home from Brighton to London. Hard AF. Horrible. But a bed and a shower. Brilliant! 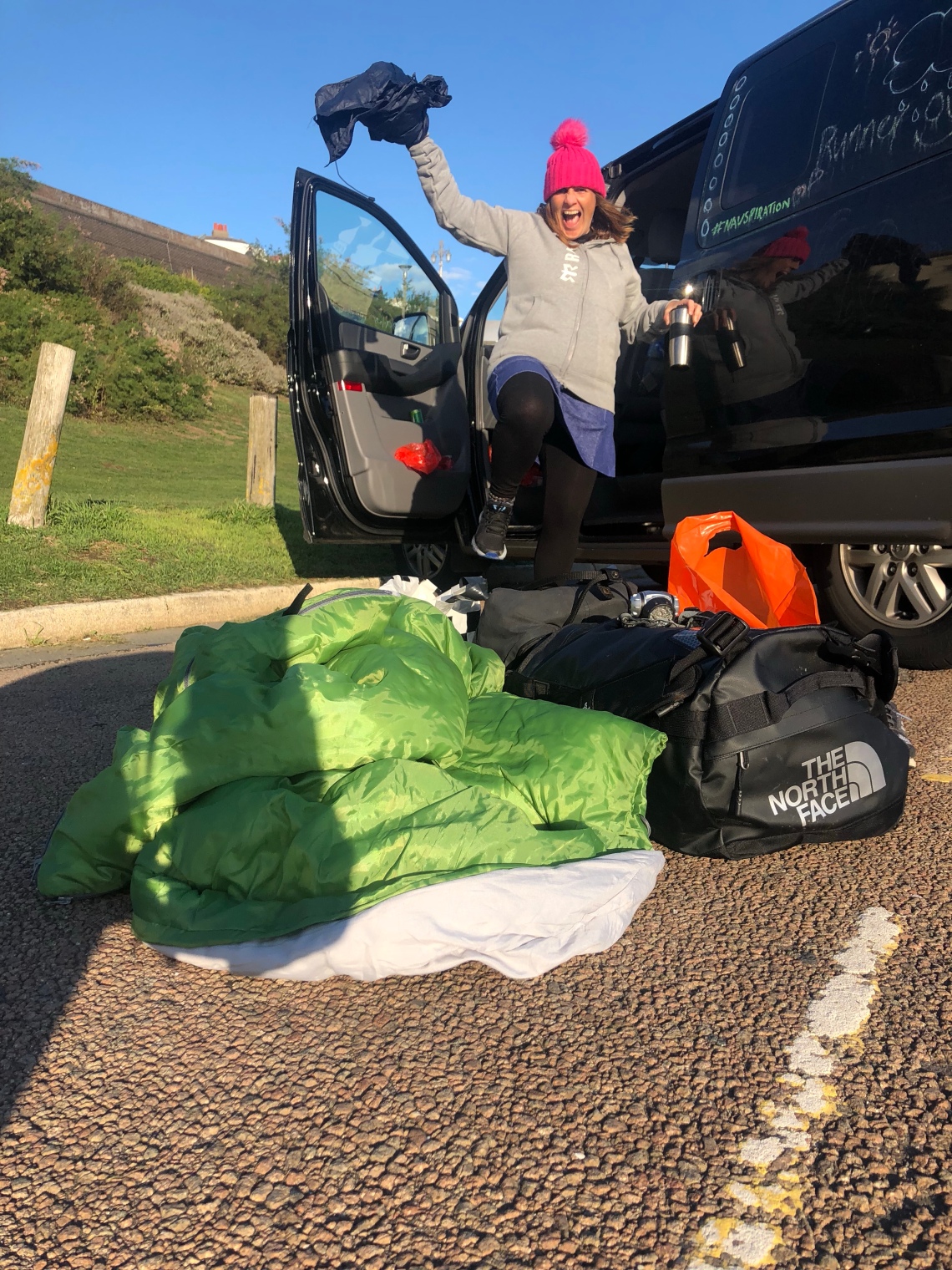 Feeling on top of the world. So PROUD of my team. Ragnar hangover. Researching all the Ragnar races. Finding all the trails. Missing your van fam. Wanting to do it all again in a heartbeat. Thank you for an amazing weekend! X

Hi! I am Sophie - a Londoner trying to balance a hectic work life whilst trying to be fit and healthy! And of course got to squeeze in a social life too. So this whole running thing started whilst training for the Paris Marathon in 2016 after my pal, Candice, said oh here is a great idea - I had four months to get ready. And I loved it. Instantly forgetting the seemingly endless training runs and the aches! Next is London Marathon 2018.. Any questions or just want a chat then just drop me a message! Sophie x View all posts by sophiebelleldn

There was an error retrieving images from Instagram. An attempt will be remade in a few minutes.